Teenage hearts are bleeding everywhere as One Direction have announced that the recent quartet will be going in Four Directions beginning March, but there’s a twist…

It was only back in November that long-standing tour manager Paul Higgins announced that he was parting ways with the uber-popular group. Then fans around the world were devastated to learn that the bands own Zayn Malik was quitting, giving this statement:

“My life with One Direction has been more than I could ever have imagined. But, after five years, I feel like it is now

the right time for me to leave the band. I’d like to apologise to the fans if I’ve let anyone down, but I have to do what feels right in my heart. I am leaving because I want to be a normal 22-year-old who is able to relax and have some private time out of the spotlight. I know I have four friends for life in Louis, Liam, Harry and Niall. I know they will continue to be the best band in the world”

Malik has since transformed into Britney Spears circa-2007, with destructive behaviour, bizarre choices of hairstyles and even became involved in a twitter feud with former band-mate Louis Tomlinson and collaborator Naughty Boy, not to mention the Perrie break-up.

The biggest blow to fans across the world happened a mere few days ago, when The Sun newspaper stated that One Direction are splitting up in March, but only for a year as they want to take a break and focus on their solo projects. This was confirmed via Niall Horan’s tweet: 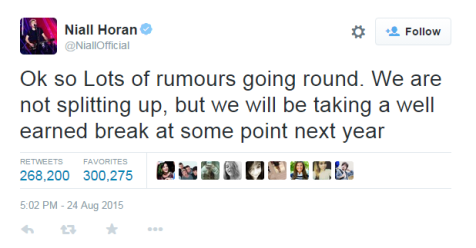 So there’s no need to panic girls and boys, they (apparently) will be back, but during the hiatus, what direction will the boys be going in?

The Sun also reports that Louis Tomlinson , 23, is expecting a baby with stylist Briana Jungwirth and therefore is going to focus on becoming a father. Harry Styles and Niall Horan, both 21, are eager to break out with solo music careers, although Harry is thinking about becoming a movie star – could we see him in the next big Young Adult franchise maybe? Meanwhile Liam Payne, 21, will focus on DJ’ing and songwriting.

Over to you, are you deeply saddened about this news? Or could you even care any less at this point? Sound off in the comments below and share.