One of the most anticipated shows to join Netflix’s revolutionary slate of original productions is Daredevil, which is set to bring a darker twist to the Marvel superhero universe and here is your essential guide.

Incase you genuinely have been living under a rock, you may know that this series is a reboot of the 2003 flick of the same name starring Ben Affleck, who has been promoted to Batman. This retelling of the story, based on the popular Marvel comic-book character is now set in the ever-growing Marvel cinematic universe and will therefore be woven into the same world that currently occupies Iron Man, Thor, Captain America and Black Widow.

Set in the crime soaked streets of Hells Kitchen, New York, Matt Murdock (Charlie Cox), who was blinded as a child, works as a lawyer by day but by night, uses his extraordinary heightened senses to try and make the city a better place from the ruthless crime boss, Wilson Fisk (Vincent D’Onofrio).

The comic book series has been extremely helpful in bringing disabilities to the forefront with it’s main hero being anything but unable to save the day and you can be sure that Daredevil the series will explore these themes and deliver a bad-ass character that’s worth championing.

Now, let’s take a look at the impressive cast assembled:

This British actor’s rise to fame should have been with his lead role in 2007’s vastly under-appreciated Stardust. Following a guest stint on Downton Abbey and a regular role on Boardwalk Empire, it seems Cox is finally going to make it big as Matt Murdock, and it’s about time.

Murdock is a very layered character, who was blinded by radioactive chemicals that stripped him of vision but increased his other senses as well granting him echo-location. After his supporting father, boxer Jack Murdock was killed by gangsters, Matt trained under a martial arts master and took on the alter ego of Daredevil to avenge his father’s death.

A former star of sexual vampire dramedy True Blood, Miss Woll plays the primary love-interest for Cox’s Matt Murdock and it’s a role that seems very close to her own personal life. Woll is a strong advocate for Choroideremia, which her boyfriend EJ Scott suffers from. The disease results in blindness and she has been using her celebrity status to bring awareness for a good cause. You go Debbie. 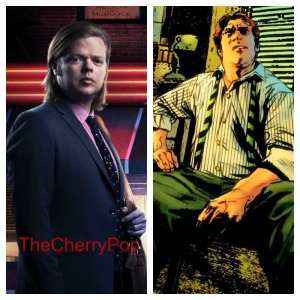 The 37 year old starred in The Mighty Ducks series and has had some supporting parts in movies and television shows for years. But it seems his career is once again looking up with his Hunger Games debut as Pollx in Mockingjay Part 1 and now with Daredevil.

Franklin ‘”Foggy” Nelson is Matt’s best friend for life, as well as his law partner. He mostly plays second string to the brilliance and charm of Matt, something which the character comes to resent. Not to mention the fight for the affection of Page which really grinds the gears of the bromance they have.

A highly praised character actor, D’Onofrio has an eclectic list of film in his filmography, which range from Full Metal Jacket, Men in Black, The Cell and even played the eccentric Detective Robert Goren for ten years on Law & Order: Criminal Intent.

Kingpin in the comics is a force to be reckoned with. His huge stature and formidable pressence as well as crime connections make him a villain of another level within the Marvel comics, and Daredevil’s greatest foe. This King of Crime may not have any superpowers, but his calculating mind, never-ending supply of cash and a unreasonably strong bear hug has overpowered many great heroes.

The high profile casting of Dawson in this supporting role came as a welcomed surprise, the gorgeous and talented actress has an extensive resume that includes: Rent, Sin City, Clerks II, Seven Pounds and Percy Jackson while Daredevil marks her first major role in a series.

This  character is a mash-up of two separate people in the comic universe, these being Claire Temple, a love interest for Luke Cage, a bulletproof superhero and Linda Carter (no, not Wonder Woman) a nurse who works at night, she takes it upon herself to heal injured superheroes after their fiercest battles.

Daredevil is the first of five Netflix shows that share continuity with the Avengers heroes that are currently in development and will premiere within the next couple of years.

These other shows are:

A.K.A. Jessica Jones – A former super-heroine ends her short career and hangs up her cape after a tragic incident leaves her psychological scarred. She opens up her own private investigating agency to deal with cases involving powered-up individuals in New York City.

The 13 episode series will be released later this year.

Luke Cage – Mike Colter will reprise his role from A.K.A. where he plays a man with anger issues, hoping to make a difference in his neighbourhood whilst dealing with his powers of superhuman strength and bulletproof skin.

Iron Fist – Set to be a martial arts spectacle, Danny Rand is a fighting master who can summon and control his inner chi to achieve increased strength, speed and reflexes as well as greatly empower his fists with mystical energy.

The Defenders – These heroes will join together as a street-level team of heroes to combat a spectacular threat and it will take all of their individual skill sets to stop it.

So there you have it, basically everything you need to know about Netflix’s Daredevil just in time before the entire series is released on April 10.

Check out the trailer below: